A captured First World War soldier’s postcard home has emerged 95 years after it was sent from a prisoner of war camp in Germany.

Charles Jeffries sent the card from a camp in Limburg an der Lahn on April, 30, 1918 to let his family in Westcliff-on-Sea, Essex, know that he had been taken prisoner.

His granddaughter Pat Nicholls, 78, of Shepreth, Cambridgeshire, had the card in a file of family memorabilia and has revealed it to local historians in her village.

The card is printed in a mixture of German and English and headed: “I am a prisoner of war in Germany.” It has been stamped in German and Mr Jeffries has written his personal details and home address in pencil.

The card gives Mr Jeffries’ regiment as the Royal Naval Division but does not indicate whether he was wounded. Mrs Nicholls is now trying to find out more about the part her grandfather – who was born in 1890 and died in 1953 – played in the conflict.

“I remember him well. I was in my teens when he died,” she said. “I wish I’d asked him about the war. But people didn’t talk about it.

“He was a waterworks inspector and worked for the Southend Waterworks Company. He died of lung cancer. I think he was gassed during the war. I know that when he was taken prisoner the shock paralysed by grandmother, Mabel.”

She added: “I’ve checked the handwriting on the card. It’s definitely his.” 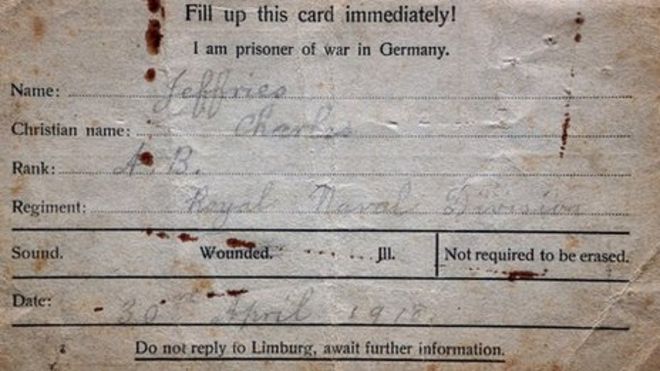