Royal Mail Letterbox – In The Middle of the River Thames?

An incredulous postman spotted the traditional box embedded into one of the buttresses of a brick bridge in the village of Sonning-on-Thames.

As he didn’t have a boat handy, he took a photo from the riverbank to prove to his bosses just why he hadn’t been able to make this particular collection in his van.

Posting a letter would be tricky too, and with the box nestled just a few feet above the water line, it would be likely to become waterlogged in the winter as this stretch of the Thames regularly floods.

Even psychic Uri Geller, who lives in Sonning, admitted he was stumped by the mystery of the letter box – how it got there, who put it there and why.

Mr Geller, a resident for three decades, said: ‘I have never seen anything like this anywhere in the world; it’s a new one on me.

‘This is a very unusual village,’ he added.

‘There are many sightings of a child ghost that walks on the bridge.

‘Maybe it was the ghost of a mischievous little girl.’

Canal users were also puzzled and took to blogs to question why the post box was there.

Some have suggested the box is part of a promotional stunt for a production of Don’t Shoot The Messenger by the Mikron Theatre Company in which ‘a gun-toting hoodlum holds up a sleepy village Post Office’.

Lost in post: Residents have pointed out that the box would be useless in winter as the river often floods

A spokesman for the Royal Mail, Val Bodden, said: ‘the recent appearance of a post-box frontage on the side of the river bridge at Sonning is a mystery to us.

‘It is certainly not an operational posting facility and we have no knowledge of how it arrived at this location.’ 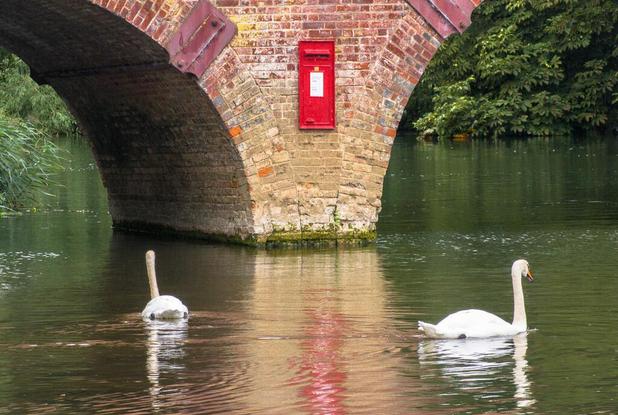