A postman has been hailed a ‘guardian angel’ after saving a young boy with autism who was about to run on to a dual carriageway.

Postie Steve Cresham was on his rounds when he found five-year-old Alfie Jennings walking alone towards busy Altrincham Road in Brooklands, Wythenshawe.

Alfie had run out of the family home on nearby Chesterton Road while his mum Corinna was having a fridge delivered.

The panicking mum had called police, who were sending officers to search for Alfie when Steve found him 20 minutes later. He grabbed the youngster as he ran towards traffic and carried him home, having recognised him from his rounds.

Corinna said: “The delivery men were bringing the new fridge-freezer in when a couple of minutes later I noticed the front door ajar. I had that terrible sinking feeling and ran round the house shouting for Alfie then went out into the street, but couldn’t see him.

“I was absolutely hysterical and called the police who said they would send people out to search for him. The deliverymen also dropped everything and went out looking.

“I didn’t think someone had snatched Alfie, I just knew he would have gone towards the roads because he is going through a phase of being fascinated with grids.

“When Steve came down the road with Alfie in his arms it was just absolute relief. Steve is a guardian angel and a hero – I can’t thank him enough.”

Alfie’s autism means he always has to be under supervision as he has no sense of danger and cannot communicate. He is also easily overwhelmed by loud noises or busy places – but loves to look at cars.

Parents Corinna and Mark, who also live with Alfie’s twin Maisie and older sister Abbie, 19, are now having alarms fitted to their doors to prevent their son escaping again.Bosses at Wythenshawe sorting office have rewarded Steve, who has worked for Royal Mail for five years, with a slap-up meal with wife Cath.

He said: “I had just been unloading my van when I turned round and saw Alfie walking on his own down the road. I didn’t want to alarm him so I followed him, hoping we’d find someone out looking for him. But when we got to Altrincham Road he made a lunge for the cars and at that point I knew I had to act

“I grappled him onto the grass at the side of the road and managed to pick him up. When his mum saw us, she couldn’t speak and I could tell she’d been hysterical. Alfie’s a lovely lad and was soon happy to be back in his garden – I don’t think he realised what had happened.” 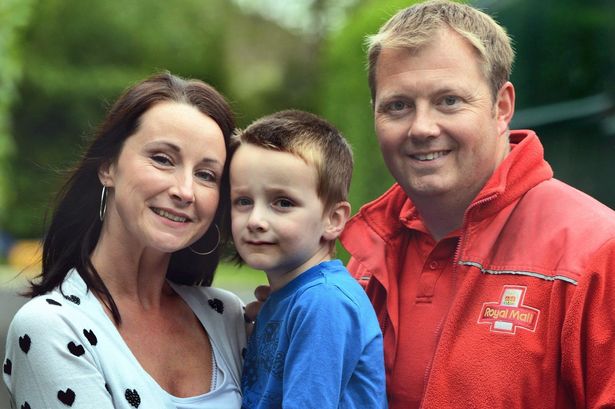